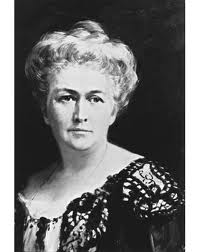 Born near St. George in Brant county, Adelaide Hoodless was motivated to her advocate role when her youngest son died in infancy after drinking impure milk. She organized Household Science classes at the YWCA in Hamilton and persuaded the Province of Ontario to undertake a province-wide program. She influenced Lord Strathcona to assist in financing the Ontario Normal School of Domestic Science and Arts in Hamilton in 1900. Mrs. Hoodless prevailed upon Sir William Macdonald, the tobacco millionaire, to contribute financially to the establishment of Macdonald Institute in Guelph and Macdonald College in Quebec.

Mrs. Hoodless is perhaps best known as the inspiration behind the WomenÕs Institute movement. Along with Erland Lee, she drafted the charter for the organization and helped organize the first Institute at Squire's Hall, Stoney Creek. That meeting, February 19, 1897, opened the way for the Federated WomenÕs Institutes of Canada and internationally, the Associated Country Women of the World.

At a meeting of the Federation of Women's Clubs in Toronto on February 25, 1910, Mrs. Hoodless made an appeal for a university school of Home Economics. While she was speaking she had a heart attack and died a few minutes later. But she had done the pioneer work for the founding of a Department of Household Science at the University of Toronto.

Though the beginnings were humble, Adelaide Hoodless felt the need for an ongoing effort to better the lives of women and rural people everywhere.

This information has been taken from the website:
PEI Women's Institute
URL: http://www.peiwi.ca/index.php3?number=1043501⟨=E